Warning…  Grumpy Cat post ahead.  Somebody’s got a case of the Mondays, and that somebody is me. 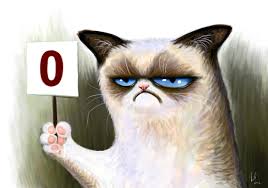 Last weekend, we took a trip to “The Realm.”

Maybe I’m just coming down off my Disney high, but ugh.  I don’t want to say it sucked, but holy crap, it is…  Meh.  And EXPENSIVE.  We were lucky enough to get one of our tickets for free, but everything you might want to do costs extra.  We got in for twenty bucks, but ended up spending another fifty – and we didn’t really even eat lunch.  We were there for a couple of hours, took in half of the magic show, had Finn ride a donkey, go down a giant side, bought a toy dagger and had Alice refuse to pet a goose.

I don’t even know what kind of creative accounting I would have had to do to account for half the money we spent.  I wanted so bad to ride the elephant, but when we got there, I realized it would have been a waste of twelve dollars – one little two-minute loop around the pen and I had to pay for ALICE?  My dad’s thriftyness reared its ugly head.  I balked and headed for the free petting zoo.

When did I get to be such a cheap skate?

I think Finny had fun.  He loved the dagger (sword-sized for him) we got him.  Unfortunately, he smacked Alice with it as soon as we got home and it has been living utop the fridge since.

He also had a good time in the maze.  Had he been a few years older, I would have embarrassed the crap out of him.  When the kid at the entrance charged for both of us to go in, I got pretty snarky.

“Oh.  That’s nice.  You guys charge for both the parent and the preschoolers to go in?  Nevermind the fact he’d probably get lost if I didn’t go in there with him?”  I rolled my eyes.  The kid gave me back two bucks.  Aaand I felt like kind-of an asshole.  But not really.

It’s all because of you, Dad.  I am this way because of you.  (I have money in the bank because you encouraged me to be a tightwad, so I shouldn’t complain too much.)

Alice loves animals; ever since feeding the giraffes at the zoo, she thinks she is entitled to touch them all.  We thought she would be happy to pet one of the geese at the Mother Goose tent…  Nope.  In her defense, the goose-handler-guy was pretty weird and kept trying to pull her hand away to touch the bird.  Alice looked straight ahead, ignored him like I’ve never seen her ignore anyone before and locked her arm down tight.

Finny wanted to ride the donkey (personally, I totally would have chosen the llama or the bull, but that’s just me), and he later went on the butterfly ride.  Alice was asleep, thank god, or I would have never heard the end of it since she was too little to sit in a butterfly all alone.

We headed out before it was anywhere time for the jousting.  Nathan and I had dived head-first into Crankyville, and we called it a day.  Alice was asleep, we were hungry for something besides turkey legs and pretzels and we were just looping around saying “no” to every five-dollar thing that Finn wanted to ride on.  We were some of the first people to leave – at only one in the afternoon, and it felt good to get out of there.

We were filthy from walking around in the dirt all day.  I was tired and sunburned, I  had a moment where I yearned for the days of just Nathan and I – before kids nagging at you to ride the swinging pirate ships (and consequently screaming like a hyena when you refuse).  I miss those days when we just had our own shit to fight about and not the kids’ demeanor to affect our moods.  Those days seem to fade back into the dusty recesses of my mind – and the memories are getting harder and harder to plunge back into.

Does it get better as they get older?  Do they stop throwing tantrums?  I realize that this is not likely, since Nathan and I had a bit of a tantrum of our own when we were there.

I’m just gonna chalk this one up to lack of sleep, my over-thriftyness and bad timing.  “The Realm” is gonna have to wait until the kids get a little older for me to want to plunge back into that haystack again.

Welcome to my corner of the universe, where we fly by the seat of our pants.

Tweeting up a storm. Or not.